– You could at least spare the kid, Vic! – Aunt Nadia cried.
– Let ‘imp see, – answered Vic. – Might come in handy in life. Right, Petrich?
The latter was addressed to my grandpa. He grumped affirmatively rolling a quirk from one angle of mouth to the other.

The boar was not fed for a day. He was looking piteously and ingratiatingly between the planks of his enclosure snorting anxiously.
I brought him stealthily a soused apple.
– You know, Vassily, – I explained to him, – you will be slaughtered tomorrow. Because… because your… fat is needed.
I stammered over the word, so unconvincing it sounded. The fat is needed, how do you like that! As if we cannot live without it.
– Do you understand?
Vassily did not. Or failed to believe.
I sighed and started to scratch him. For the last time.

The boars like to be scratched. Because they are unable to do it themselves.
You come to the fencing, reach the hand over and run the hard, plastic comb on the rough, hirsute skin with scroop and crackle.
The swine mellows. It freezes up and offers its back and sides. The white, dry bits of old skin fly in flocks.
In a while, it begins to sway and finally the heavy bulk tumbles down on one side like a great tight sack. Then you may step inside the enclosure.

Thus, you scratch this formerly savage and now miserable animal and wonder over its might combined with brutish humbleness. And consent to live in crud. Just to feed from the bucket, where granny pours leftovers of a soup, potato peelings, pomace, wastewater after rinsing a cloth used to take away crumbs from the table or washing the cutlery.

You rustle with a comb and try to understand: do you feel sorry for him or gloat over? And you are happy to be a human being. And not destined to be slaughtered for fat. And the fat from human flesh is not served at table.

It would be interesting if it were served.
Imagine Aunt Nadia, Uncle Victor, and Uncle Yuri with this foolish brush-like moustache of his, who looks like a shell game artist from a movie about bandits, paying you a visit and you treat them with sauerkraut – considered a decent dish of which you can spare any amount, though. Accompanied with onions, radish and dill all put in enameled tub.
Then you set cured fat in the center of the table. And boast: help yourselves, dear guests, have a go at it, while the fat is solid, we have cut it out of Granny Lilly, whom we slaughtered.

So, you scratch the boar and your heart covers with hoar-rime. With brittle chippings, ice particles as in a refrigerator during defrosting: the door is open; a thawing semi-transparent little piece falls with a clatter and trickles down in a pan placed below.

I had a bad night. Dreamed of a WC with dim yellow light inside, dirty riffled stairs and a place to sit in eagle-like position.
I step on one stair, but they all crumble as clay, fall off by pieces, which are flushed by water into a dark, stale, oozy mud.

I woke up forcefully. The street lamp was shining through the window. I was tormentingly struggling against big Z’s but missed an instant and got to sleep afresh.

I was then dreaming of my digs, where a bed with wire mesh base was placed in the garden. Then a sort of roof was fabricated over it and discarded clobbers thrown on the base. A pillow was also found.
A trunk with old magazines was shoved under this bed.
I sit on the bed and find it wet, because the clobbers usually taken inside the house during rain to keep them from growing damp, were left on the bed this time.
I lie on the wet stuff, fidget and feel uncomfortable.
I turn the pillow round and discover the other side all covered with worms and woodlice.
I throw it, jump with disgust and see maggots fall from under the mattress.
I run aside and wake up.

…Uncle Vic agreed to do the job for an ear. And drink a quarter-liter bottle of vodka together.
Vassily was led outside.

He grunted slightly. A huge, strong descent of wild boars of old times was looking pitifully and entreatingly with its transparent, grey blue eyes.
I’ll bet anything, it knew. Knew where it was led.
Knew and did not resist.

I remember the same story in school. We catch Gryanka and give him a fourpenny one. But he shrinks his small head into his rawboned shoulders with every blow and meekly repeats: – Don’t! Please, don’t!
But that makes you even more furious and you are ready to kill him, to get his guts ripped out and fed to the birds of prey. Just kill and not to see him anymore.
“Please, don’t…”. But we’ll do!

This is the case with Vassily: – “Please, don’t…”.
Its legs are tied and it has a stone in the mouth.
And a shining knife lies on a brick.

Three men overturn the body in an old bathtub, right in the dooryard.
And as if in a dream I see the blade in Uncle Vic’ hand and the next moment the hilt sticks out behind the ear.
The rattle of swine hoofs against the battered enamel.
The blood is incredibly scarlet – this color just does not exist! It’s like gouache at a school lesson in drawing.

Why does it not die so long? An eternity passed before it went quiet.

Everything within me was covered with frost dew. I was quiet, cold and fooled around, as befits a boy, who always spends his vacations in the country with its apples, pears, prunes and beheaded hens and ducks running in the yard, while their heads pulsate their last on a plank between two nails (I drove them in), next to the lying axe.

Then we were smoking the beast. The brazing torch was droning. The hay was clicking in the fire.
The frightful, devilish carcass was turning black. Horrible blisters were swelling up. The smell of burning hair was suffocating.
Hideous flat meat-chopper was used to scrape and charred polygon platelets were falling to disclose the wrenching, repulsive pink matter.

Blood dripped from the bathtub. It was left unattended to be washed away by rain. It just so happened that the hissing radio set forecast extensive precipitation in Krasnoarmeisky District.
However, the cats were quicker to arrive. Tender, foxy-colored kittens touchingly poked their smeared muzzles in the pool.

In the days that followed the blood turned blue. I stood and gazed being surprised at almost pearly color of the blacksoil where the pool went inside.

…In a short while, the cured fat was tasted.
– Is Vassily good to eat? – Grandpa asked winking and confirmed without waiting for reply – Delicious!
And he was right. The fat was really a success.

…Sometimes, I have a dream about our country machinery and tractor station that smelt of black oil fuel, where a motor vehicle made at the Gorky Automobile Plant and tools were kept. Secondary echo was heard in the vast shedder, which amplified voices and chatter of sparrows. It looked like our own station but something was different. Because the gates were set ajar and there were huge roasters inside with fire rampaging within.
In the meantime, in the yard, where canisters with engine oil and cases with grease lubricant are scattered, the workers have spread tarpaulin and smoke a man. Alive.
They act busily, adroitly and without taking cigarettes out of their mouths.
And a smudge of burnt flesh and bone processing plant is in the air.

But the most horrible thing is that persons being smoked do not yell. Naked, miserable, being covered with carbon crust, they clench their teeth from incredible pain and only slightly moan sometimes in an educated way not to ruin the right disposition of the guys, when the work is going fine: Don’t, Please, don’t…

Such dream is a rare thing. It was quite a while ago, when I saw it last time, but I feel uneasy: what if it comes again? But sleeping obsession passes, inner hoar comes back, and there is no fear again.
What is a dream to me?
promo 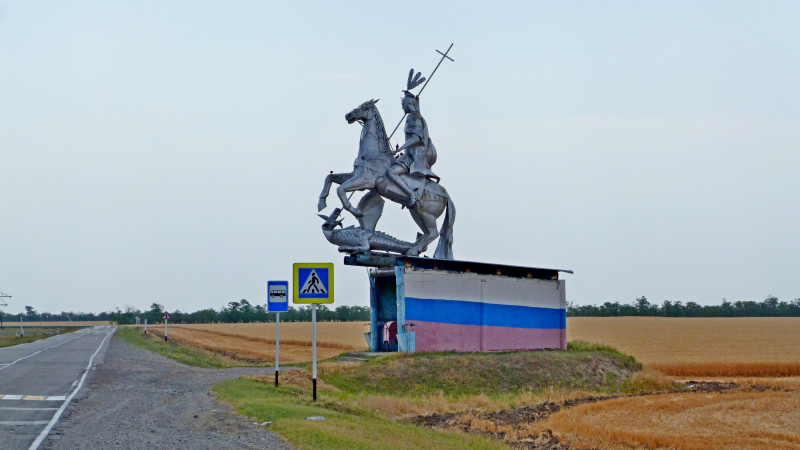